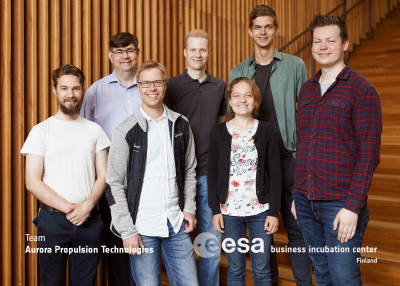 Aurora – Innovations with an Infinite Possibilities

As the common saying goes, “only the sky is the limit” for something. In this time around, however, that is not the case at all. You could even say that the sky is only the starting point for Aurora, a Finnish space technology start-up.

If you think that the videogame industry is booming, you should also pay attention to the space industry. The market is growing fast  — following the increasing global demand for satellites. It is especially noteworthy that nowadays more and more satellites have in-built propulsion capabilities. This naturally creates the need for mass volume production of the propulsion products in the future.

Aurora Propulsion Technologies strives to seize this opportunity. The company’s focus is to “make spacecrafts more agile by providing propulsion, attitude determination and control system (ADC), and deorbiting solutions”. Aurora’s current products are for the satellites that travel low Earth orbit (LEO). Nevertheless, the company is dedicated to come up with a technology that will be suitable for moon travels and later for interplanetary voyages.

Aurora is currently working under European Space Agency at the business incubation centre.

Aurora’s team provided us some background information of the company:

“Aurora Propulsion Technologies was founded just over a year ago by Roope Takala and Perttu Yli-opas. The founders met when Roope was running the Nokia space program and Perttu was working at Bell Labs. Later Pekka Janhunen also joined the founding team. Pekka is the inventor of the Solar electric sail and this e-sail and its implementation with an attitude control system and other components became the driving force of the company’s product portfolio. The ability to do interplanetary travel cost effectively with small satellites also became the core of the company’s vision.”

Although the Aurora’s focus is at the satellites which fly at the Earth’s low orbit, the company’s future goals are more distant than that:

“Aurora Propulsion Technologies provides a complete suite of products to suit small satellite propulsion needs. We started the company with a detailed analysis of the customer need base and designed our products to support it. Additionally, we designed a growth curve into our product portfolio so that we can grow with our customers, from simple components to a complete satellite MaaS service and from LEO to Lunar and Interplanetary travel.”

Current and Near Future Products 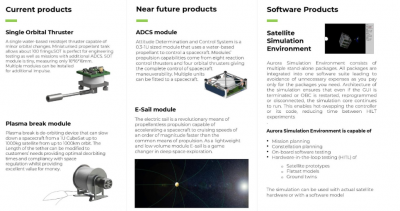 We had an opportunity to make a short interview with company’s co-founder Roope Takala. Working at big enterprises like Aurora is not his first dive into the world of big projects. Takala has previously been working on projects like Nokia’s space program and he has also done his time as a researcher at MIT and CERN.

But where does this innovator get his motivation from?

Takala reveals that ever since he was a child, he always wanted to be an astronaut. Soon he came to realize that in order to fulfil his dream, he had to have a PhD and a citizenship of the United States of America. Even though his PhD is now underway, Takala admits that he is more than happy to live in Finland.

But what is it like to be working with a space related company?

After a short pause Takala explains that it’s really nothing apart from ordinary work. “It’s only rocket science”, he says, accompanied with a laughter. As an old Nokia specialist, he points out that there are significantly less standards in space industry than in a cell phone industry. “So, it is basically much easier than making phones”, Takala admits.

Takala points out that because the science behind the space projects is mainly developed in the universities, all the completed devices are made by hand. There are simply no factories or companies providing customers with rocket parts. Therefore, there is a need for mass produced propulsion parts that could be sent straightaway to the customer.

This opportunity is something that the company wants to seize.

“Aurora Propulsion Technologies Technology portfolio is selected to fit into the strictest standards, but also is optimised for industrial manufacturing, and quality optimization. Our tether for plasma brakes and e-sails production is designed to be completely automatic roll-to-roll manufacture and our resistoget thrusters are designed with automated mass volume production as the key driver.”

In the future, Aurora is depending on a chain of subcontractors who will make the process even more fluid.

Space industry has also one big bonus: there is no shortage of job applicants. While there have been no official open positions inside Aurora, there has already been many eager space pioneers who have expressed their interest for working in the field. “They are all highly skilled and motivated”, Takala states proudly.

Self-motivated applicants are vital to the company, mainly because Aurora is growing fast. The hiring process started only recently, in February, but there are already 18 people working in the company. That makes Aurora largest rocket engine company in Northern Europe.

“We will start our project with small devices until we reach the orbit of moon. After that we will open the wings of the solar sail, which will be the largest man-made object in space, and then travel to the interplanetary space”, Takala says with a dreamy voice.